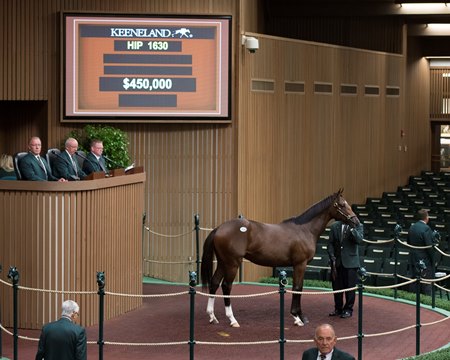 When agent Mike Ryan first saw Hip 1630, a Curlin  colt bred and consigned by KatieRich Farms, he was reminded of another son of Curlin that he purchased with Niall Brennan a few years ago.

“He reminded me a lot of Palace Malice . (He had) a lot of leg—a beautiful quality to him,” Ryan said of the yearling colt he purchased for $450,000 during the Sept. 17 sixth session of the Keeneland September yearling sale.

“He reminded me a lot of him (Palace Malice), just very smooth, light on his feet, (with a) great line of mechanics to him. Nothing I could really fault him on,” he added. “I knew when I saw him on the farm Aug. 24 …  he wasn’t going to be cheap. He oozes quality.”

The colt, who is out of the winning A.P. Indy mare False Impression and comes from the extended female family of 2012 Kentucky Oaks (G1) winner Believe You Can, has big shoes to fill as 2013 Belmont Stakes (G1) winner Palace Malice finished his career with six graded stakes wins and more than $2.6 million in earnings.

“I wouldn’t say he’s a bargain, but we’re very happy to have the horse (Hip 1630). We didn’t steal him by any means. He was well sold, but at the same time we got a good horse,” the agent said.

Ryan, who has been active throughout the September sale so far, made six other purchases during the Sunday session, including a Scat Daddy filly, Hip 1653, for $400,000 out of the Hermitage Farm consignment.

“The good ones are getting a little scarcer, but the there are still a lot of nice horses here today.”

Erin Shea contributed to this story.