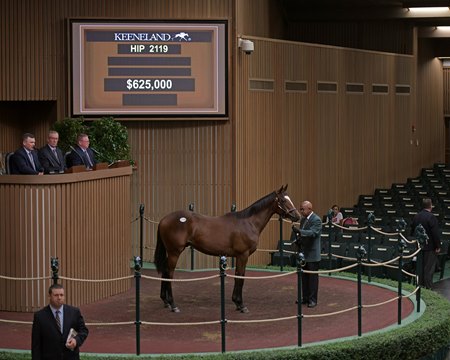 “He’s a standout colt, probably a little immature and he looked like he would be a good fit for Book 3,” said Tammy Ingebritson, of KatieRich.

Also late in the session, Peter Flour’s Speedway Stable went to $425,000 for a Bernardini  half brother of grade 1 winner La Coronel. Consigned by Nardelli Sales, agent, the dark bay or brown colt was bred in Kentucky by Kim Nardelli, Rodney Nardelli, Susan Bunning, and Godolphin.

Kim Nardelli said the colt was entered in Book 3 because he would stand out: “Big fish in a little sea.”

Mark Taylor, whose family’s Taylor Made Sales Agency is leading consignor, said the sale’s strength is almost too much of a good thing since some buyers are having difficulty inspecting all the horses.

“It has been very challenging for a lot of people to see the (Sept. 15-16) Book 3 horses because of how congested it has been at the barns, but horses sold well despite that,” Taylor said, acknowledging it’s a good problem to have.

While there are a number of reasons a Thoroughbred auction can be up or down, Taylor said strength of the U.S. economy was the biggest positive influence on this year’s market, taking place in an environment in which Thoroughbred racing is under the microscope.

“The very top of the market is strong, which everyone thought it would be. The economy is rolling and that’s enough to overcome some other little glitches and issues that racing has,” Taylor said. “The stock market is doing good. Business is doing good. At the end of the day there are lots of people who love to race horses and when those things are doing good we do good. I was worried about issues—mainly California and how healthy the California circuit is—and that has stabilized. But I think the main reason the sale is good is the economy. Almost every person who owns a business that we know through the horse business is saying ‘my business is much healthier now than it was five years ago.’ They have confidence that their core business is doing well.”

Consignor Reiley McDonald of Eaton Sales said buyers were willing to overpay at the top end of the market, resulting in a softer middle market.

“On the top end, the market is unbelievably good, but in the middle it has become very soft,” McDonald said. “They’ll pay twice as much for one, but not pay 30 cents on the dollar for another.”

McDonald said many buyers are still passing up good horses based on pre-sale veterinary inspections.

“People are being very hard on horses based on the vet information and are letting some good horses go by the wayside,” McDonald said.